What is Code Signing?

What is Code Signing? Code signing is the method of using a certificate-based digital signature to sign executables and scripts in order to verify the author’s identity and ensure that the code has not been changed or corrupted since it was signed by the author. This helps users and other software to determine whether the software can be trusted.

Because of the potential damage that an executable or script can cause to a computer system, it is important that users be able to trust code published on the Internet. If you know that an application is signed by Microsoft, Inc instead of IWantToHackYou, LLC, you’ll be much more likely to install it. There are two important ways that Code Signing increases trust:

For example, say you write an application called WordWrite, sign it using your code signing certificate, and distribute it on your website. Before running the application, your users will see that it is signed by you and they will know that it hasn’t been changed by a hacker in the process of downloading it.

Another advantage that code signing provides is the ability to trust updates. If you release an update to a software application and sign it uses the same key as the original application, the update can be automatically trusted because it couldn’t have come from anywhere other than you.

What is a Code Signing Certificate?

What is the role of trust in Code Signing? 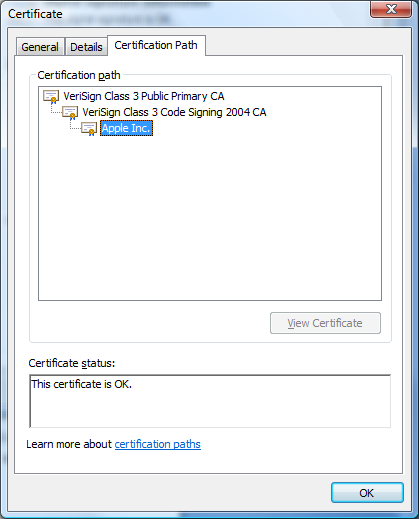 This does not guarantee that the code itself can be trusted, only that it was signed by a specific legal entity. A hacker could still get a code signing certificate and sign a virus but he will be legally accountable for it. In addition to validating an entity’s identity, commercial CAs require applicants to pledge not to distribute software that they know, or should have known, contains viruses or would otherwise harm a user's computer or code.

What is an EV Code Signing Certificates?

How does Code Signing Work?

In order to sign a piece of code, an author goes through the following process:

When a user receives the application, he verifies it by:

If the two hashes match, the user knows that the application has not been modified since it was signed. Most of these steps are handled by the operating system automatically. For example, when you run a signed application on Windows, you will see the following dialog:

This indicates that iTunesSetup.exe was signed by Apple Inc. using a certificate from a trusted certificate authority (one that has root certificates included with Windows). If you right-click the executable and view the properties of it, the Digital Signatures tab will let you view the details of the certificate: 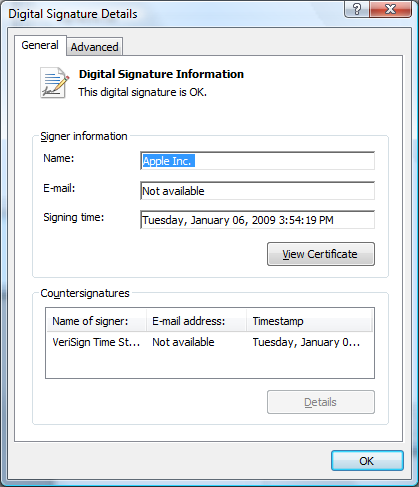 This shows that the certificate was issued by VeriSign. An unsigned application would display the following dialog: 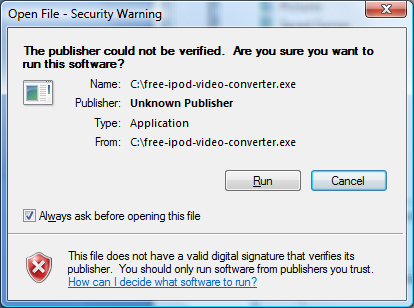 Code Signing is essential technology that allows the author of an application to be verified and allows software integrity to be verified. Though it doesn’t prevent malicious software from being distributed, it ensures accountability and software integrity. As long as a user recognizes and trusts the publisher of an application, he can safely run it without worrying about whether it has been tampered with.