Thawte is a large certificate authority, owned by Symantec, that sells SSL certificate products. Thawte was established in 1995 (sold to VeriSign in 1999), and is headquartered in Cape Town, South Africa. 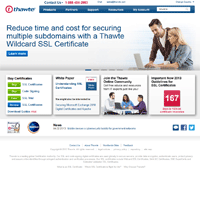 The Thawte SSL certificate reviews listed below will help you determine whether Thawte is a good company to buy SSL certificates from. The reviews have been verified to be from real Thawte customers.

If you want to compare Thawte SSL certificates with certificates from other SSL providers, use our SSL Wizard. If you have ever purchased or received a certificate from Thawte, please post a Thawte SSL review to let others know what to expect.

Popular Sites That Use Thawte

The Worst Service I've Ever Received
January 10, 2018 Permalink Overall Rating:
Product: SSL Web Server Certificate with EV
As of the time of this review, we are almost 7 weeks in trying to get an EV certificate from Thawte. We still have not received it because we are still waiting for them to complete the validation process. Timeline: November 24: Order placed November 30: No communication from Thawte. Contacted support via chat to see if there was anything we could do to facilitate the order. Was told no. December 5: Still no response from Thawte, emailed Thawte support to get update. December 6: Thawte emailed to advise they needed us to fill out some paperwork in order to validate me as being a legitimate employee that can order certificates. December 8: Submitted completed paperwork to Thawte requesting it be expedited due to delays. December 13: Thawte finally emails to tell me the paperwork has been submitted to the appropriate team for processing. December 19: After no response, I emailed Thawte again asking for an update. December 21: A coworker contacted Thawte by phone to escalate the order. Was told they would engage for completion of processing the next day. Thawte suggested to coworker as a means of being able to move forward with our project we could opt to buy an SSL123 certificate and use that until the EV could be completed. I recommended against that, stating that purchasing another certificate because of their terrible service was not acceptable. December 22: No response from Thawte processing team. Department whose project needs to move forward decides to purchase SSL123 certificate. December 26: Thawte finally emails back to say that the paperwork is not appropriate for the type of certificate we are ordering (even though they provided said paperwork) and provided me new paperwork. December 28: I emailed asking a question about some specific organization related information that we need to fill out. December 29: Thawte emailed to respond back to my question. We submitted the completed paperwork. January 4: Thawte indicates they need to complete a call to verify my employment. No problem, I provided contact information for our HR department. No call received by end of work day, I emailed them to advise I would be out of office on the 5th. January 5th: They email to advise they would schedule the call for January 8th. It is now January 10th and we have received no call. I am at my wits end trying to get this completed. By far and beyond this is the absolute worst service I have ever had to deal with. I can't even even put into words the sheer amount of anger and frustration there is dealing with this horrible service. I have three times recommended cancelling the order completely and doing business elsewhere, however the powers that be suggest we see it through to completion because of the efforts thus far. If you need SSL certificates, I highly recommend you look elsewhere and avoid Thawte.

Very professional, and easy for EV SSL.
July 18, 2017 Permalink Overall Rating:
Product: SSL Web Server Certificate with EV
We first tried with Comodo, without success, because it was awful, and we had to cancel order because they were unable to validate our company using the official phone book ! On the opposite Thawte was easy, and professional !

VERY POOR BUSINESS - UNRESPONSIVE
October 31, 2016 Permalink Overall Rating:
Product: SSL123 Certificate
Website: http://I cannot Install it.
Organization: TruckingComfort.com
I have had nothing but trouble from Thawte. There is no warning when the certificate expires. And if you need to make a change, you get literally zero help from them. When you do try to update and tell them that the email address changed, they act like they change it, but then continue to send all communication to the old email. At least I assume they do because I do not get anything from them. I updated the SSL for 2 years, then found that our VPS was no longer available, before they issues the certificate. I sent an email to cancel until could get another VPS. No response from Thawte. I did get the SSL, but no response to the cancel request. I sent 2 more request and still no response from this very poor organization with no support. Stay away from them. There are much better places to get your SSL and for less money. Don't buy their hype about a better SSL. There's is no better than anyone else's.

Favorite SSL vendor
March 4, 2015 Permalink Overall Rating:
Product: SSL123 Certificate
I prefer to use Thawte for a number of reasons. Broad compatibility, ease of installation and certificate generation, and price. "Best bang for the buck" if you will. I've never contacted customer support because I've never had to. The certificate portal is incredibly easy to use - simple but powerful.

No support and too difficult to use
February 5, 2015 Permalink Overall Rating:
Product: SSL123 Certificate
In the first place the certificate is not trusted by most browsers. They give you a long set of instructions of how to make it work and at the end it did not function at all. I contacted their support and got told that because I purchased the certificate through a re-seller they are not able to assist me. I will never use Thawte

Wildcards; CC payment only
January 25, 2015 Permalink Overall Rating:
Product: Wildcard Certificate
Advised by sales that wildcard certs are only purchasable with a credit card payment. Not for me, need to be invoiced. Went elsewhere.

Great customer service
November 10, 2014 Permalink Overall Rating:
Product: SSL123 Certificate
Website: https://improviseforreal.com
What I most appreciated was that I was able to call and speak to a live person who answered my questions. Even though the purchase itself was done online, it's very important to me to be able to talk to a real person about the inevitable questions that I will sometimes have which are not addressed by the sales materials on the web. So Thawte's great customer service was the reason I chose this company and I've been very happy with them ever since.

Easy renewal
October 14, 2014 Permalink Overall Rating:
Product: Code Signing Certificate
Organization: Abacus International Pte Ltd
I encountered an error during the order verification and emailed to customer service. I received an email that the certificate was approved within the same day.

Re: Thawte SSL Certificate Reviews
August 6, 2014 Permalink Overall Rating:
Product: SSL123 Certificate
We were very nearly late in renewing our license but processing, notifications and receipt of certificates was timeous.. Reminders and Assistance have always been very forthcoming..

Awesome Company
August 6, 2014 Permalink Overall Rating:
Product: SSL Web Server Certificate with EV
Website: http://onlinebanking.unionstbank.com
Organization: Union State Bank
Unfortunately our certificate with Network Solutions had expired and it would have taken 10 business days to get it renewed. I placed the order on Friday morning and we had the certificate and had it installed before 5:00 that same day.

Responsive and Professional
August 6, 2014 Permalink Overall Rating:
Product: SSL Web Server Certificate
Thawte has been very helpful with my somewhat unusual SSL certificate requests. I've had a number of phone conversations and useful email communications as I worked out what we really needed for our situation. They've also been very accommodating in refunding the balance of replaced certificates as needed.

Easy To Use, Easy To Install.
August 5, 2014 Permalink Overall Rating:
Product: SSL Web Server Certificate
Straight forward transaction, good documentation. The best is the SSL Assistant that configures everything for you, Simples!