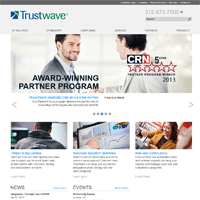 Popular Sites That Use SecureTrust

Excellent Support
August 24, 2021 Permalink Overall Rating:
Product: Other
We have a reseller relationship with Trustwave, and any time we need support with their API, errors that we aren't understanding, or anything else their support is right on top of it, giving us quick and valuable assistance.

Securetrust Scans Reports Fail Wrong!
September 29, 2020 Permalink Overall Rating:
Product: Other
After contacting them for a year, the techs don't know enough and read of a book of house rules only. Because of a complex setup we assigned an SSL certificate to the firewall VPN service so it could pass the scans. Because we can't assign a certificate with a public ip address as the common name (I hope any tech knows why on a firewall) due to authentication required for that to be issued... They were not helpful at all and don't care. We have assigned a domain to the firewall. All the services and security is in place. Securetrust will not work to improve their services at all. They showed on the phone to not care about the client at all. Only say "fix it or you have to dispute the scan everytime it runs." What? We are in 2020 where technology allows much better than that! A simple dns search will show that the ip is properly assigned to a domain name that is the common name of the certificate.... but they don't understand that and fail the scan. Worse service!

Terrible Service
July 26, 2017 Permalink Overall Rating:
Product: Several different products
We used Trustwave for years for Managed Security services related to PCI. Besides poor service, when we left they immediately came after us for months of service we never received - in a very aggressive fashion. When we tired to talk to someone no one would return our calls. Finally we paid based on a settlement agreement and then they had the nerve to give us a new invoice a few months later! Despite my written evidence from them they still aggressively pursued us all for services we never received. Stay away - poor products, bad service, and bad attitude.rank

worthless
September 22, 2016 Permalink Overall Rating:
Product: Other
total BS , what customer service , there is none ! can not log on , continually told businness is not recognized ! Trsut Wave SUCKS ! Speed rating of several days is not corrrect , never got it . Try rating them you will see.

Can't renew using there site but they charged my card three times.
November 3, 2015 Permalink Overall Rating:
Product: Premium SSL
Website: http://automoxie.com
I was sent notifications by trustwave my certificate was about to expire. I went to their site and renewed. After supplying my credit card, I was given an error code and a customer support number to call. The support was unable to find the transaction and had me try two more time unsuccessfully. The next day I saw three transactions from Trustwave for $178 each on my bank statement. I called customer support back and was told I needed to call the third party provider that I used to purchase the certificate even after I told them I used their website to renew. I'm now having my bank dispute the charges and I'm going to another company for my SSL certificate.

Trustwave is the WORST EVER
September 16, 2015 Permalink Overall Rating:
Product: Premium SSL
Since Trustwave was bought few years ago, their customer support is the WORST EVER. They don't know anything they are talking about, and they don't solve any problem you call them with. Totally waste of time and a ton of frustration along the way. Buy somewhere else.

buggy ssl
November 25, 2013 Permalink Overall Rating:
Product: Premium SSL
Website: http://www.ecocolors.net
Organization: ecocolors
ssl was not setup right and expired in the middle of the subscription. It is extremely bad for business. Not the 1rst time I am having problems with trustwave either.

Far too hard
May 6, 2013 Permalink Overall Rating:
Product: Premium EV SSL
Website: http://mongrel-phones.com.au
I answered "after several days" above only because there was not a longer option. I had purchased a EV SSL from Trustwave - but eventually gave up. The process was drawn out so long that I just got a regular SSL cert. They are unresponsive to emails and basically just keep you in the dark as to where you are up to. As there is only one person in my business - I had to get an accountant to verify me - I'm ok with that. But, days go past with no response - and when you do ring them back again you are still left in the dark as to when things might get finished. I suppose I should have taken their support guys advice "Why do you bother with an EV cert anyway?" - it just demonstrates their attitude I guess. These guys have no consideration for customers and the need for timely service. Don't get me wrong - they are polite and courteous. They'll get things done in their own sweet time thank you. The kicker is, I only went with them because my hosting provider offered a more expensive, but "automated" easier option. I was time constrained so I paid.

You might as well try digging a hole to China.....
March 15, 2013 Permalink Overall Rating:
Product: Premium EV SSL
This was the longest most drawn out worst process to get this completed. I'd NEVER recommend them to a friend. (Maybe an enemy though...)

Extremely slow and bad service
December 1, 2012 Permalink Overall Rating:
Product: Premium EV SSL
I really wanted to like Trustwave: they're independent, and don't have the sleazy high-pressure sales of some other CAs. But their EV ordering process and customer service are just unacceptable. I immediately sent in the vetting paperwork. 7 days later, they had a minor problem confirming my address, which I corrected; 6 days after that, another problem, which I corrected. Another 8 days after that, my cert was "pending issuance:" "it requires two people authorized to issue to be here at the same time, and unfortunately due to scheduling problems they've not been available." Another 8 days after that, it still had not been issued. After another 3 days, they announced a promotion. In order to use it, they said I'd need to send in a new form, and they'd send a message to the person handling my request - implying that he would send me one to fill out. I heard nothing, and after another 8 days, followed up. Their reply: "There is no update unless there is something outside of this thread number. The last communication we sent you stated you would have to submit a new CRF. Please tell us if you have done that." I cancelled the order, and they tried to refuse giving a refund.

Trustwave has serious problems
November 19, 2012 Permalink Overall Rating:
Product: Several different products
Trustwave has serious problems with their PCI compliancy system. They are completely inconsistent and unreliable. They offer simple solutions then do not support the solutions they even provide. If I had a choice I would move to another company, but alas, I can not because of the merchant provider.... I feel like I'm drowning in a sea of ineptitude with no boat in sight... Much less the shore...

Re: Trustwave SSL Certificate Reviews
October 24, 2012 Permalink Overall Rating:
Product: Premium SSL
They were asked THREE TIMES TO ADD ME as a contact on the account. This took a month of back and forth. When issuing a support ticket, they takes days to answer and then just kind of space out on you until you ask them again "What is going on with this ticket?". At this point you wait days for a response.

Not worth even to look at it
August 27, 2012 Permalink Overall Rating:
Product: Premium SSL
Website: http://rocousa.com
Expensive, no support, no idea what they are doing there. Many errors and hard to install if you don't know how. Pushy renewal process trying to get it and sell you more than what you need.

Great provider for resellers.
May 8, 2012 Permalink Overall Rating:
Product: Premium SSL Wildcard
This is a great provider for resellers. Was using other providers and have consolidated everything onto this. Only Gotcha we've run into is that their root authority isn't recognized by older Android or iPhone devices. But outside of that their web interface and turn around times have been repeatedly exceptional.

Impossible to Renew
December 29, 2011 Permalink Overall Rating:
Product: Premium SSL
Had their Premium SSL for three years. Received several emails advising me that the certificate was about to expire. When I tried to renew using links provided, I got server error messages. Customer support would not address the server issues I encountered and suggested applying for a new certificate instead of renewing. Trustwave did not care if I remained a customer or not so I switched to Digicert.

Hopeless Support
June 1, 2011 Permalink Overall Rating:
Product: Several different products
Went for Verisign to Trustwave as it was the cheaper alternative, NEVER AGAIN. Support is poor for international clients, they don't respond to email after email. Their skills are very limited and they only choose to help you on what they know and ignore the rest. After awaiting 1.5 weeks for my EV SSL Cert (I already have another EV cert with them) I called them up to ask for an update. They assured me it was in the last stages of validation. Next day I get an invoice from Singapore for outstanding invoices. I told them I paid it 3 months ago. It took them a day to validate it from Trustwave America and they reply back with "oh, we have received the payments". Im still stuck with no EV, most pathetic place ever. I will be revoking all certs and demanding a refund once I find a new supplier