Apparently no one is perfect when it comes to renewing SSL Certificates. Google forgot to renew an SSL Certificate for www.googleadservices.com resulting in an error displayed on users' computers for a large part of the day.

As Tim Gross explains, if you are using Google Checkout on your site, this is having a major impact. Not only that, if you are using the conversion tracking scripts for AdWords, and your potential buyer clicked on your ad, they may be prompted with a security warning and leave your site. There goes your sale, and you paid for that.

Here is a screen shot of the security warning on Safari. You will get a similar one on any other browser: This happens way too often, simply because it is an easy thing to forget. Late January, Yahoo forgot to renew their SSL certificate for the publisher network.

Another big web site, LinkedIn, forgot to renew their certificate on July 6, 2008.

Google again forgot to renew a certificate for smtp.gmail.com on July 29, 2008.

The Better Business Bureau (www.bbbonline.org) appears to have left an expired certificate on their site for over a month. (November 2nd, 2008).

On January 23rd, 2009, VeriSign itself let a certificate for pip.verisignlabs.com expire. 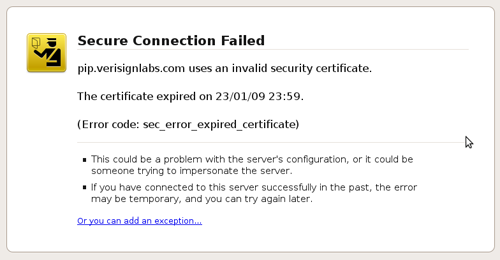 On January 25th, 2009, the certificate on www.grandcentral.com was found to be expired before Google replaced it.

On Valentines day, February 14th, 2009, the Payment Gateway Linkpoint had an expired certificate on secure.linkpt.net.

On December 17th, 2009, www.macromedia.com had an expired certificate.